A Sliver of Redemption (The Half-Orcs, book 5) by David Dalglish

Fantasy author David Dalglish continues his series of the half-orc brothers, whose struggles have bathed the land of Dezrel in demon fire….

The war god Thulos marches across the world of Dezrel, recruiting soldiers into his demon army and annihilating all who stand against him.

With the aid of three kings, Harruq Tun and his friends must save the nation of Mordan, whose priest-king has sworn to the dark god and will summon whatever nightmarish creatures necessary to maintain rule. Once freed, they can turn their attention east, to the war god’s approach.

Before the walls of Mordeina, and high above in the golden city of Avlimar, the last survivors make their stand to stop a world of death and conquest.

A Sliver of Redemption by David Dalglish

The final battle has come.

A serial killer in Japan is chopping off heads. An unlikely pair of journalists try not to lose theirs.

Being a photographer at a Tokyo newspaper is no walk in the park – unless you’re Akio Tsukino and only get assigned to shoot parades and park festivals. All that changes when a serial killer starts chopping off heads in nearby Kofu. Akio maneuvers his way onto the assignment in order to prove himself and get closer to enigmatic staff writer Masami Sato.

When the investigation takes a supernatural turn, the unlikely partners find themselves caught between solving the mystery and saving their own lives.

In this thrilling and imaginative debut by Tristram Lowe, getting the story may cost them their heads.

Rachel Hershberger’s life in Paradise, Pennsylvania is far from happy. Her papa struggles with a terrible event from the past, and his emotional instability has created an irreparable breach between them. Rachel’s one desire is to leave the Amish way of life and Paradise forever. Then her prayers are answered.

Rachel discovers that the strange, key-shaped birthmark above her heart identifies her as the heir to a vast fortune left by her Englischer grandfather, Robert St. Clair. If Rachel will marry a suitable descendent of the St. Clair family, she will inherit an enormous sum of money. But Rachel does not know that behind the scenes is her long-dead grandfather’s sister-in-law, Augusta St. Clair, a vicious woman who will do anything to keep the fortune in her own hands.

As the deceptions and intrigues of the St. Clair family bind her in their web, Rachel realizes that she has made a terrible mistake. But has her change of heart come too late?

The first great war of Ovira is over, and the most hated king in centuries is dead, but his nephew still lives. However, Basen had nothing to do with the destructive war his uncle started. In fact it was his uncle who exiled him and his father to the territory of their enemies, where Basen’s dreams of becoming a legendary mage now fade, as he must work all day just to eat. His only chance at regaining some semblance of the life he thought he would lead is to join an elite school that trains, houses, and feeds a thousand new young men and women each year. But little does Basen know that his determination will put him at the center of a war even bloodier than the one he’d barely managed to avoid.

“Brad Wilcox was an excellent narrator. I really enjoyed his subtle takes on the characters and the use of his voice to create suspense.”

“Brad C. Wilcox does a great narration. He is easy to follow and his characters are easily distinguishable.”

“The narration was well done, each character was distinguishable and unique, 10/10 for Mr. Wilcox his performance definitely increased my enjoyment of the book.”

Rise of Legends (Kin of Kings book 2) by B.T. Narro

Basen’s unique skill with energy leaves him hunted by a psychic of legendary power. But that becomes the least of his troubles when an enemy army of unknown numbers, loyal to a murderous pretender to the throne, surrounds the Academy where Basen has honed his talents. As he begins uncovering the truth about his enemies, it does little more than show him how powerful they really are. But the most dangerous of all, the one who hunts him, will shock everyone by accomplishing something so diabolical, so utterly insane, no one would’ve guessed it was possible.

Shadows of Kings (Kin of Kings book 3) by B.T. Narro

For many young mages like Basen, the Academy is more than just a place to learn the art of manipulating energy. It has become the only sanctuary in this unbalanced war, a symbol of resistance. But the Academy can’t stand up to Tauwin’s army much longer. As Basen and a group of allies take on the task of recruiting troops from other territories, he soon comes to find that no one is stupid enough to fight…no one except a fearsome horde of creatures more powerful and violent than they are smart. Basen begins leading them back to the Academy, only to realize there’s a good reason humans have kept away from these creatures for centuries.

On the other hand, Tauwin has problems of his own. His benefactor in this war arrives in Kyrro to claim what he was promised in exchange for his support: half of the territory. Sanya quickly assumes this benefactor to be the opportunity she needs to fix everything that has gone wrong in her life, planning to gain his trust and turn him against Tauwin by informing him of Tauwin’s lies. But soon, she’ll discover that this masked man, who’s come to Kyrro with his own army, is even more dangerous than he appears.

“I love this book serious, and especially how it is narrated.”

A Crumble of Walls (Kin of Kings book 4) by B.T. Narro

A midnight attack to the Academy leaves a wall in rubble and deepens the cracks in the already unstable alliances within the school. But for Basen, there are more important matters than the grabs for political power going on around him. His mother’s still rotting away in prison, and his father might kill Basen’s cousin for putting her there. On top of that, Basen’s recent promise to a powerful psychic allows him only a few days before he must return to Merejic for a task that remains a mystery.

Determined to free his mother and turn his obligation to the psychic into an opportunity, Basen comes to a risky plan in which he’ll need the help of those he trusts the most. But little does he know that his friends and family won’t be enough to get him out of this alive. He will have to rely on an enemy more powerful than himself.

The Edge of Shadow (Kin of Kings book 5) by B.T. Narro

In this epic culmination of the series, a betrayal forces Basen and his allies out from the protective walls of the Academy. A ruthless army begins hunting them down with plans of extermination. When Basen is separated from everyone, he must rely on himself to stay alive until he can reunite Kyrro’s Allies. His determination to not only survive, but to lead his army to victory, inspires a plan that will forever change the fate of Ovira. Now he just has to figure out how to implement it. 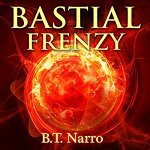 Bastial Frenzy (The Rhythm of Rivalry book 4) by B.T. Narro

As the momentum of war builds, desperation to win dominates the whole continent. How far will each army go when honor becomes nothing more than a weakness? The final battle approaches, but not before a brutal betrayal is revealed that leaves even the Krepps in shock.

“The narration is perfect – a strong, believable performance with just enough nuance to make the story clear and intriguing but still leaves room for the listener’s imagination.” 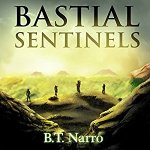 Bastial Sentinels (The Rhythm of Rivarly book 5) by B.T. Narro

In this epic culmination of the series, Cleve returns to Greenedge in hopes of keeping the war from reaching his homeland. But he never expected what’s happened in his absence. The four kings have been killed by an emerging army, displacing Jek and the Takarys – Cleve’s only trusted allies. Desperate to find them, he turns to the very man responsible for their absence. Meanwhile, Jek faces the toughest challenge of his life when his king is murdered and he’s forced to flee the land he’s sworn to protect. Now with five armies at war, Jek struggles to understand who he should be fighting against, especially when his old friend Cleve is seen marching with known enemies. Whatever Jek decides, it had better be soon. The green fog of desmarls covers more of the continent each day. The man-eating monsters grow hungry, and their muscle far exceeds any of the five armies at war.

Demise of a Devious Neighbor by Elaine L. Orr

The reverberating bangs shake Melanie Perkin’s nerves. Either someone’s aiming at her truck, or they don’t know fireworks are supposed to go upward. Could things get any worse? Yes. The next day she discovers a dead body in the barn on her late parents’ farm, Sheriff’s Deputy Granger’s gun pointed at the chest of a primary suspect – someone she holds dear. Illegal merchandise flooding the small Iowa town of River’s Edge, upcoming Fourth of July activities, and a half-finished manuscript all hinder her determined efforts to solve the crime before an innocent person is convicted of murder. In this, the second novel in beloved cozy mystery writer Elaine Orr’s River’s Edge series, the author once again offers humor, believable characters, and tight prose as she carries the listener to an exciting climax. Those who follow her Jolie Gentil series will find themselves right at home. You won’t want to miss this one!

A note from Brad C. Wilcox about this audio performance:

I made a mistake in accepting this book due to the author’s request that there be no separation between the voices. I take full responsibility, but the result is that I have gotten some bad reviews saying things like  “He did not seem to try an do a feminine voice.” and “I could not hear any distinguishing changes in the narrators voice for the various characters or situations.” Well… the author expressly didn’t want me to do a feminine voice or have variations in the characters. If you listen to my other books, it will be apparent that I do try, and hopefully succeed.

Sign up for my mailing list, and each time I release a new audiobook that I narrated, you'll automatically be entered to win it for free! Sign up here! I don't email too often, so you won't have inbox overload.